The Kingdom of Heaven

I'm not quite sure that I believe in heaven. That is a totally ludicrous statement for a Christian to make and I know it. But it is true quite a lot of the time. The reality of heaven seems weird and detached and I find it hard for the motivation of a future reward, the future grace that Peter talks about ("Therefore, with minds that are alert and fully sober, set your hope on the grace to be brought to you when Jesus Christ is revealed at his coming." 1 Pet 1:13), to be the reason for living today. I find it difficult to explain why that is. I think because I squirm at the idea of following Jesus being about rewards. Another weird statement. I don't like to think that I am only living the way I live today for the not yet rather than for the now. I find it hard to get excited about an eternity with God. I find it hard to summon up joy at the prospect of 24/7 worship. I wonder if I am alone in that?


And yet, I know that my doubts about heaven, my nervousness (almost) about what it will be like and whether it's there at all come from my misunderstanding, and not God's bad planning. In my head - though not yet my heart - I know that heaven will be a wonderful and beautiful thing; that we will truely be able to appreciate the glory and awesomeness of God without being held back by our sin and our unbelief. That the deepest longing of the human soul is simply to hang out with God and be in his presence. I know this because I've tasted it. I know this because I hunger for a greater wanting of God. (A confusing sentence: put more simply, I want to want) I want him, but only in part. But that part is enough to know that I want him more. You cannot be hungry for something you have never tasted. I have tasted a morsel and I know the full reality would blow my mind. I just can't quite seem to translate that into my view of heaven. I can't get my head (and my heart) around the longing and aching and waiting for heaven that the bible speaks of.


I raised this with a friend yesterday and - as well as being quite relieved that she felt similarly! - was reminded of a question I have had scribbled in my bible for the past few weeks. On a scrap of paper, in green biro, I have simply written The Kingdom of Heaven? I have been meaning to think and blog about the answer to that question for weeks. Not that it's even a question really. It's an idea. An idea that's too vast to really digest or think about. I have thought about it though and it was only yesterday that my thoughts clarified themselves. My friend suggested that - although it might be difficult to get excited about being with God because, in the brokenness of our sin, we struggle so much to really taste and see what that is like - it is easy to get excited about the coming of a kingdom. It is easy to get excited about a broken world made right again, about no more mourning or death or tears, about a place where joy and gladness will overtake us and sorrow and sighing will flee away (Isaiah 35). And a kingdom can't really be a kingdom, the kingdom cannot come, unless there is a king to rule it and people to live in it under the rule of that good and perfect king and (incredibly) we get to be those people, the people living out what it is to be in the kingdom. But (and this replaces my unease about heaven with a profound surge of joy for the present) we get to live out that reality now. And (there's more) it is our living out of that reality that brings heaven (the place where that reality is in its realest, fullest form) to earth. We are the children of glory, born into a new inheritance through the death and resurrection of Christ, who all of creation is groaning for; we get to participate in the act of making new, of redeeming. We are co-labourers in recreation. 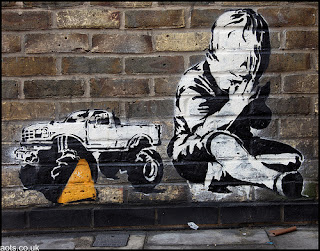 As Jo and I talked and prayed together, I got a picture of a little kid whose toy is snatched and broken by someone else. He takes it to his father but, rather than repair it and simply hand it back, the dad invites the son to work alongside him to put the toy back together again. I think the Kingdom of Heaven looks a little like this: we have been bashed about and bruised by our own sin, the sins of others, and the pain of living in a sinful world and God wants to come alongside us not only that we might be fixed but that we might be those who fix others. Perhaps that is what is meant when Jesus says that the Kingdom of Heaven is like a mustard seed: a tiny seed of faith is dropped into our souls that we might believe and as we grow in our maturity alongside a community of others doing the same we - together as believers, as the church, as his body - become this huge safe space, this refuge, in which all the birds can find safety. 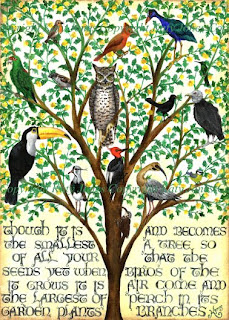 In the bible the Kingdom of Heaven in compared to a myriad of seemingly contradictory things: It is a man sowing seed; a mustard seed; hidden treasure in a field; a pearl of great price worth selling everything else for; a king who wishes to settle account with his servants, who demonstrates supreme mercy and punishes the failure to show mercy in return; a man hiring labourers for his vineyard who flips worldy justice on its head by paying each one the same regardless of the hour they started work; a king who throws a wedding banquet for his son; ten virgins with lamps… 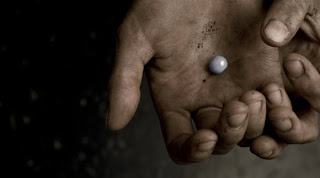