Was Jesus the Messiah?

I owe a great deal to Rob McDonald for his lecture last week on this topic, but wanted to gather some thoughts together about the myriad of things that ran through my mind as we considered this question. The first thing, obviously (!), was Monty Python: 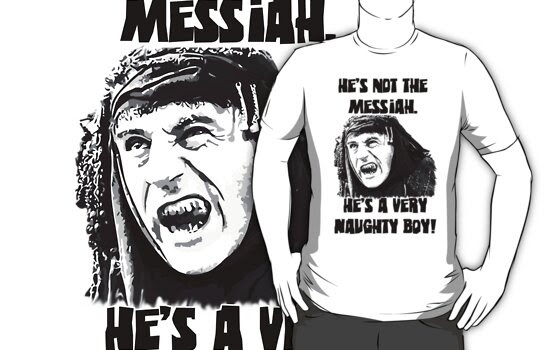 Moltmann suggests that the question that should be central to all theologians is the identity of Jesus; to even say the words Jesus Christ is a kind of confession of identity: Jesus is the Christ, the Messiah, the anointed one come to save his people. But what does that mean? Who are we saying Jesus is when we say He is the Christ? And is that idea based on a set of pre-constructed religious notions or is it rooted in the life of Jesus as it's told in the Gospels? Put another way, is our knowledge of Jesus' identity essential Pauline in origin or gospel focused? I would argue that for most conservative evangelicals, our understanding of Jesus comes from Paul at the expense of examining his life. There is some kind of simplification where we know all the "tions" (justification, propitiation, expiation, sanctification etc) but forget about the historical man Jesus who actually lived and actually died. We cannot bend Jesus' life to a set of intellectual assertions that we have gleaned from Paul; we need to look at what Jesus' own understanding of what it meant to be the Messiah. Otherwise we end up with a too thin Jesus without any possibility of genuine relationship.

When we look at the Jesus of the gospels we start to see what kind of Messiah he thought he was. And it wasn't the Messiah that was expected. Jesus redefines what the term means. He isn't a political radical. Although in some sense he is. He isn't an action hero come to redeem Israel. (Luke 24:21) Although, again, in some sense he is. He is a real human being, a man of Jewish flesh living among God's chosen people of Israel. He is a human being in whom the fullness of God dwells. He is the one upon who the Spirit not only rests by remains.

We cannot come with a set of expectations about who God is, or what the Messiah might be, and try to apply them to Jesus but must allow Jesus to be the one who defines God. Jesus is not God's front to the world but the full revelation of God's character. (Hebrews 1:3 "The Son is the radiance of God’s glory and the exact representation of his being.") We can, in some sense, only find the meaning of God in what happened to Jesus. God is not lessened by becoming incarnate but made known to us in doing so. Thus, it isn't merely that Jesus is Godlike, but that God is Christlike. This is pretty mind blowing. What is even more mind blowing is that this Jesus who tells us what God is like (John 1:18 "No one has ever seen God, but the one and only Son, who is himself God and is in closest relationship with the Father, has made him known.") defines his Messiahship in terms of service: "The son of man came not to be served but to serve." (Mark 10:45) If the way we know what God is like is through observing the way God dealt with us in the person of Jesus, then God is not merely the one we are called to serve and obey but he is the one who serves and obeys. In some sense, to serve is as much what it is to be God as to be served; to be God is as much about obeying (as the son in perfect obedience obeys the Father) as it is about being obeyed. I think this is a profound truth missing in so much of our presentation of God. If we fully believe that Jesus is fully God then something of what it is to be God is to be the obedient and suffering servant. Thus, we need to allow our long list of words describing what God is like to be challenged by who Jesus reveals God to be.
Posted by Nic Findlay at 13:33