The God who sings

The is something of a re-revelation, but it's an important one: God sings. More than that: God likes singing. He sings because He's happy. He sings as a father sings over his precious children (Zephaniah 3:17). He wraps us up in a melody of deliverance in times of trouble (Psalm 32:7) Perhaps that doesn't sound so revolutionary, but there is something so beautiful and profound about a God who delights in the world he's created and enjoys rejoicing in it: a God who takes the time to whisper a lullaby to a hurting child, who celebrates alongside those coming up out of a difficult place, who somehow guards with a tune rather than a sword. Often my view of God is so skewed: either he's mushy and fluffy like clouds or marshmellow - pleasant but rather insubstantial - or He's a tyrant waiting for his creatures to mess up and then punishing them for their misdemeanours. But that isn't how the scriptures depict him at all.

Earlier this week I was reminded of a passage in Proverbs which says this: 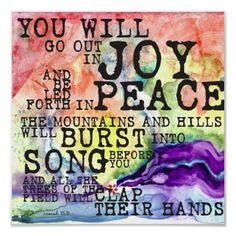 I was there when he set the heavens in place,
when he marked out the horizon on the face of the deep,
when he established the clouds above
and fixed securely the fountains of the deep,
when he gave the sea its boundary
so the waters would not overstep his command,
and when he marked out the foundations of the earth.
Then I was constantly at his side.
I was filled with delight day after day,
rejoicing always in his presence,
rejoicing in his whole world
and delighting in mankind. (Proverbs 8:27-31)
There's several thousands pages of hot (or not) theological debate about whether or not this passage refers to Jesus or simply to Wisdom personified, but what struck me was the sense of joy and delight that fills these verses. There is something wonderfully childlike about the depiction of Wisdom watching, awestruck and giddy, as God's creation is birthed. And that giddiness is intensified when humanity is looked upon. People are pretty magical. We are peculiar and funny creatures but we are worth delighting in and our God rejoices at the world that he has made and us little people in it. God is the glad God. Not the tyrant. Nor the fluffy man in the clouds.

And this God, the God who sings and delights and rejoices, wants us to join Him. Stan Smith, in his book Prophetic Song, talks about our role in joining in what God is doing. The created world in the bible is a world in full song, (Isaiah 44:23, Isaiah 55:12) and yet, as Smith puts it "sometimes we are the one part of creation that refuses to praise." We humans don't always like to sing songs to God. It seems a bit silly perhaps, a bit exposed, a bit awkward. I am not saying that singing is the only form of praise or the only way to worship God, but it is an important one. If we don't praise God then the rocks will do it for us. Smith makes his point by referring to Jesus' triumphal entry: Jesus rebukes the Pharisees for trying to silence the little kids crying out to him. They are the ones who have got it; they are the ones jumping up and down with excitement about the coming of this most unlikely and unexpected king; the reserved and the religious stand back. No such undignified behaviour for them. (2 Samuel 6:22) No thank you very much and do pipe down with your childish squeaks. We don't do that here.

And yet, their refusal is followed by the great groaning of creation. Where man failed to recognise Jesus and give him praise, creation knew who He was and responded to his death. The rocks, literally, cried out: the earth shook as Jesus died (Matthew 27:51). Creation gave voice to what was happening when man failed to do so.

I am not quite sure what any of this means. But it means that being glad is important. Recognising God is important. Acknowledging what is good amidst the mundane is important. For me, it has also meant, increasingly, that singing is important. I am not an especially musical person. I can't read music. I don't have the patience for learning an instrument. But I do like to sing. I love sitting with my guitar and strumming to God. And, bizarrely, I only seem able to strum when I'm doing just that. Young people frequently ask me if I can play this and this and this and the answer is usually no. No, I can't. I really can only sing when I worship. Peculiar. And likely laughable to many. But it is bizarrely true. For me, music comes from a place of worship; it comes from the overflow of a childish heart before a mighty God wanting to somehow find the words to say something, express something. Just as God sings when he looks at us his beloved kids, so my own heart starts to sing when I look up at my Dad.

And so, in fear and trepidation, here's some singing:
https://www.youtube.com/watch?v=PBjINbmkzAk
Posted by Nic Findlay at 11:01