Emotions are an odd thing. They sneak up on your unawares. An unexpected incident on a TV programme reduces you to a blubbering wreak; a minor misjudgement by a fellow driver leaves you spitting feathers and muttering expletives Mutley style under your breath. A couple of weeks ago, I burst into tears all over my slightly bemused husband because I’d forgotten to book an antenatal class and thus concluded that I was going to be a terrible mother. It’s not logical, but it’s certainly how we seem to function. Or at least how I seem to function.

And my immediate response is to withdraw. When circumstances are hard and the pressures of life overwhelm me, I want to run away. I want to seek an easier alternative. Perhaps if we have two cars instead of one then life will be easier. If Hamish had a different job then we could spend more time together. If I swapped community work for a nice little job in a private school then I wouldn’t be such a colossal stress head. There is probably some truth in all of these things but I think I am learning that to exchange one thing for another in the hope that life will be better; to ache for a new season because this one is hard is sometimes my way of ignoring the actual issue. Chesterton’s wry word, when asked what was wrong with the world, return to me: “I am.”

My friend likened it to the following picture: if something is cracked and you put pressure on it, the cracks will – of course – get bigger. But, if you remove the pressure the cracks won’t go away. You can pretend that they are not there, gloss over them with a change of situation, but unless you address the root cause of the cracks they aren’t going anywhere. Kind of like subsidence in a house. You can pretend the ground isn’t unstable by building a beautiful mansion smack bang on top of it but, the truth will out: the house will fall down. Eventually.

There is a profundity in Jesus’ simple story of the wise and foolish builders. (Matthew 7:24-27) Both builders face the same problem: there is a massive, great big whopping storm. The first builder, the one who builds on the rock, isn’t safe because there isn’t a storm; he’s safe because he took time to address his foundations. I’m sure the second builder blamed the storm for his house falling down, but the storm wasn’t really the issue. His building style was. I’m sure he blusteringly protested that it wasn’t really his fault: how could he predict a flood? How was he to know that it would be supremely windy that day? Is any house really expected to withstand that kind of pressure? But Jesus is, as ever, uncompromising: the house fell down because of mistakes made long before the storm even made an appearance.

I feel those same red-faced protestations rise up in me: the reason why I snapped at Hamish was because I’d had a hard day; the reason why I’m stressed is because there are difficult things happening and they are stressing me out; it wasn’t really my fault that I got so irrationally annoyed by someone else’s poor driving because, well, they should learn how to drive properly shouldn’t they?

Cracks. Cracks cracking into bigger cracks. Cracks splintering out of control. Cracks that suddenly, without warning, become visible on the surface. 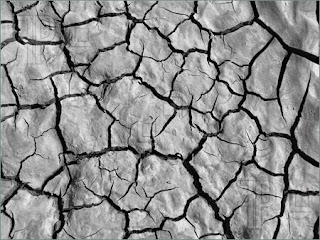 I did a bible study last week with one of my god daughters. I love reading the bible with her. I love it because she’s so practical, because, for her, there really is no point in reading God’s word unless she responds to it and unless it makes a difference. We read the start of Philippians together. After about three sentences, I was convinced that this had been a bad idea. It’s a beautiful letter, but it’s complicated. There are lots of long words and hard concepts and, as we read, I was distracted by thinking about how to simplify the message, how to make it accessible; I was so busy thinking of all the possible things that might make comprehending the passage tricky that I missed the blindingly obvious thing about Paul’s letter: he is stupendously, ridiculously, happy. Leah got it straight away: he’s pretty happy, isn’t he? He’s in prison but he’s happy. Well, yes. Yes, he is. And it is – now that you come to mention it - completely mad. His circumstances do not exactly strike you as being joyful; after all he is penning the words whilst chained up to a prison guard. And yet, he is thankful (1:3), joyful (1:4), confident (1:6), optimistic (1:12). He interprets his situation in a way which, to most of us, seems utterly bizarre.

If ever a crack was going to show its ugly face, it would, surely, be at this moment. But there is not a crack in sight. I do not say that because I think that Paul was super human. I’m sure that, at times, he was desperate, hurting, weeping, confused and angry like the rest of us. But he’d paid some pretty serious attention to his issues, to his foundation, and now, in the most extreme and awful of circumstances he acts with love and grace. He praises God for his chains. This man is able to sing songs in the darkest places. (Acts 16:25)

Oh, how I crave to be like this. But to do so means taking a look at those cracks. The small ones. The tiny little fault lines that I like to pretend don’t exist. It means recognising that, if I am angry, then that anger is not only a response to my circumstance. That anger has been lurking unaddressed. That anger is to do with a poorly built foundation. The smallest provocation, the first indication of storm clouds, will reveal it for what it is.

What, then, is the remedy? Paul says that he has learned the secret of being content in any and every situation. (Philippians 3:12) That the only way to deal with your cracks is to make sure that you know the master-builder, to know that Jesus is with you and is in you, to depend on his strength in your weakness, on his calm in your storm, his peace in your anger. I do not think this is something that happens automatically. I think it is something that you have to practice. We can call on Jesus’ name in a desperate moment and plead with him to help us to respond in a proper and godly way (thank goodness). But if our actions are to become increasingly like his regardless of the pressure of our circumstance then we need to get into the habit of hanging out in his presence, of recognising, acknowledging (Hosea 6:3) that he is present in us (Colossian 1:27), and that his presence makes all the difference.

They will be like a tree planted by the water that sends out its roots by the stream. It does not fear when heat comes; its leaves are always green. It has no worries in a year of drought and never fails to bear fruit.
(Jeremiah 17:8)

The Lord will guide you always;
he will satisfy your needs in a sun-scorched land
and will strengthen your frame.
You will be like a well-watered garden,
like a spring whose waters never fail.
(Isaiah 58:11)