Our three week old daughter, Sarah, has colic. No one – including doctors and health visitors - seems to quite know what colic really is; a miscellaneous discomfort vaguely connected to trapped wind. It is horrible to watch. When she feeds she screws up her tiny little face, arches her back, writhes and then – of course – screams. And screams, and screams and screams. On Monday she screamed for three hours. I should have swallowed my pride and rung any of the wonderful parents I know admitting defeat and bidding for their help, but fierce independence kicked in and, instead, I simply joined Sarah and sat on the floor and cried. I cried because she was crying. I cried because she was in pain. I cried because I couldn’t make it stop. And because her screech was so loud and so persistent that I thought the neighbours might ring Social Services.

I have struggled with irritable bowels for nearly a decade. Whilst in pain on the loo in the early hours of the morning, I have often questioned why God doesn’t heal me. I have shouted and ranted and raved at him. I have given him the silent treatment. I have been bitter and resentful. But these past few days, I feel like God has spoken something new. In the middle of the night, as Sarah has cried and writhed and I have wanted nothing more than to hide under the covers and go back to sleep, God has shifted something within me: I have sat, remarkably calmly, with my daughter, praying for relief from the pain in her bowels. I have massaged her tummy gently, looked at her tiny, red, screwed-up face with tenderness and thought, I know. I know what that feels like. I know what it is to be frustrated and uncomfortable and to not be able to make it right. Whereas on Monday I felt a deep frustration and anger welling up from the core of my being, instead I have been overcome with love for her. No every time. Not every cry. But more often than not, I have felt what I want to call compassion.

I am not quite sure what compassion is. I don’t think it’s just feeling someone else’s pain. I think it’s something to do with sitting with someone in their pain, with choosing to align yourself with the discomfort of others which isn’t quite the same as trying to fix it. I have not been able to fix Sarah’s colic. Sometimes no amount of burping, massaging, walking, patting will do the trick and we just sit together, waiting it out till it passes.

In Gregory Boyle’s astonishing memoir about his work with gang members in Los Angeles, Tattoos on the Heart, Boyle recounts a conversation with a bunch of teenage inmates about the distinction between sympathy, empathy and compassion. The class go through some examples of the first two, but are silenced by the latter until one inmate says, “Compassion – that’s sumthin’ altogether different. Cause that’s what Jesus did. I mean…Compassion…IS…God.” 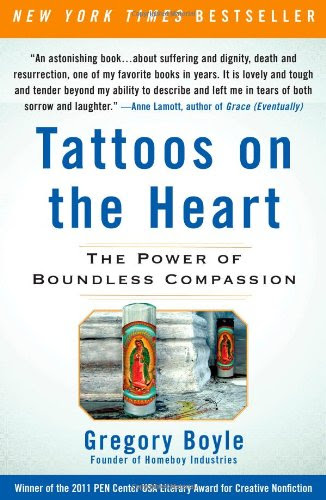 I’m not trying to suggest that my own bleary-eyed actions at 4am are the same as the kind of compassion that Jesus shows us. Far from it. But Jesus, in some sense, is only able to have genuine compassion on the people that he meets because he comes close to them. Compassion doesn’t work from a distance. It’s messier than that. If I didn’t know what it was to struggle with bowel pain, it would be hard to share Sarah’s pain and sit with her in it. Similarly – perhaps – Jesus’ compassion for humanity can only be so beautiful and so full because he becomes one of us. He comes to sit with us.

Boyle puts it like this, “Jesus was not a man for others. He was one with others. There is the world of difference in that. Jesus didn’t seek the rights of lepers. He touched the leper even before he got around to curing him. He didn’t champion the cause of the outcast. He was the outcast…the strategy of Jesus is not centred in taking the right stand on issues, but rather in standing in the right place – with the outcast and those relegated to the margins…the Beatitudes is not a spirituality after all. It’s a geography. It tells us where to stand. Compassion isn’t about feeling the pain of others; it’s about bringing them in towards yourself.”

This is altogether more challenging than simply recognising and feeling someone else’s pain; it means we sit with them in the midst of it. To be compassionate as God is compassionate is, as Boyle puts it, a question of geography. With whom do we align ourselves? Where are we standing? Do we watch from a distance and comment on what it what someone’s burdens might be like (sympathy), acknowledge that we have had a similar burden ourselves and thus know what it is like (empathy), or do we do the Jesus thing, the compassion thing, the sumthin’ else altogether?
Posted by Nic Findlay at 11:39