I recently discovered Annie Dillard. She is an astonishing writer: beautiful, raw, powerful; sentences and images that lurk in your head for days. As far as I'm aware, she doesn't believe in Jesus, but she does write some pretty astute commentary on the Christian faith. In one of her non-fiction pieces she concludes that the church doesn't seem to have the "foggiest idea" about the One that they claim to worship. I think this is -sadly - probably true. And I say that as much to critique myself as anyone else. She writes: "It is madness to wear ladies' straw hats and velvet hats to church; we should all be wearing crash helmets. Ushers should issue life preservers and signal flares; they should lash us to our pews. For the sleeping God may wake some day and take offense or the waking God may draw us out to whence we can never return." (The Abundance, p.257)

I don't think Dillard means that we need protection from an angry, lightning-bolt wielding God who might zap us unsuspectingly at any given moment; I think she has simply observed the gap between the the way that God is revealed in the bible - and for her in the wildness of nature - and the way that we tend to bind Him into little churchy boxes that we'd rather not scrutinise too closely, thank you very much. We have sanitised God. We have tamed his wildness to make him more comfortable.*

But, in doing so, I fear we have made him rather boring.

A few years ago, one of the young people I was mentoring had a lot of questions about faith. As I tried to give her some answers I realised she thought Jesus was boring. And I realised that part of that was probably my fault. We, the church, are notoriously good at misrepresenting Jesus, at taking away his wild beauty, his abounding love and faithfulness, his humour, his bluntness, his fierce concern for social justice. And stripped of all that, we end up with, at best, a rather limp Messiah. At worst, a Messiah who is judgmental, hypocritical and unloving.

This morning, I listened to a sermon where the preacher spoke about the call on the lives of those following Jesus to carry his name, to represent his identity to the world around them. The sermon was based on the part of the Old Testament where God reveals his goodness to Moses by declaring his name, by telling him who he is and what he's like:

"Then the Lord came down in the cloud and stood there with him and proclaimed his name, the Lord. And he passed in front of Moses, proclaiming, “The Lord, the Lord, the compassionate and gracious God, slow to anger, abounding in love and faithfulness, maintaining love to thousands, and forgiving wickedness, rebellion and sin. Yet he does not leave the guilty unpunished; he punishes the children and their children for the sin of the parents to the third and fourth generation.” (Exodus 34:5-7)

The responsibility of those following God then becomes to correctly represent his character to the communities of which they are part; to show the world what God is like. Thus, the sermon suggested, the importance of the fourth commandment: "Do not misuse the name of the LORD your God," or "Do not take the LORD's name in vain." Not simply avoid cussing or using God's name as a swear word, but don't take God's name upon yourself, don't be known as his follower, if you're going to do a rubbish job of representing who He is. This was Israel's major failing in the Old Testament, and the reason God gives for their exile from the land: instead of showing the surrounding nations how good the name of God was, the people profaned the name of God; they misrepresented him. (Ezekiel 36:20-21) Perhaps this is what Dillard means when she suggests that God will take "offense." God is offended that the behaviour of those who believe in him causes others to believe things about him that aren't true.

Correctly representing God remains the call of Jesus' followers today, and I worry that we're not doing a very good job. I certainly don't always do a very good job. If to follow God, and represent him, is to display the hallmarks of his name and identity, then I need to ask myself if I am like him, if others around me would see in me what He is like: one who is compassionate, gracious, slow to anger, abounding in love and faithfulness, boundlessly forgiving yet passionately concerned for justice. One who takes risks, who is brave, and honest, who thirsts for adventure, who longs to change the world and is dissatisfied by the status quo. Sometimes. Yes. Perhaps. I certainly pray that this is what people see in me. But sometimes, definitely not. I am not slow to anger. My love is limited - often after just an hour spent with a toddler in the morning. I hold grudges rather than freely forgiving. I resist taking a risk for the sake of someone else if it's too costly for me.

But Jesus trusts in his followers to represent him. He left us the task of showing the world what He is like. And he left his own Spirit within us to transform us into a clearer image of himself (2 Corinthians 3:18)

And He is wild. Not boring. 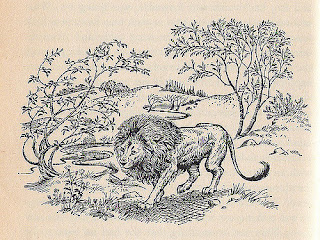 * I find it almost impossible to think of the wildness of God without picturing C.S. Lewis' Aslan and remembering that he not a tame lion: "Aslan is a lion- the Lion, the great Lion." "Ooh" said Susan. "I'd thought he was a man. Is he-quite safe? I shall feel rather nervous about meeting a lion"..."Safe?" said Mr Beaver ..."Who said anything about safe? 'Course he isn't safe. But he's good. He's the King, I tell you.” (The Lion, The Witch and The Wardrobe)
Posted by Nic Findlay at 11:37