What is the message?

Today is a good day: early morning swim; beautiful, fragmented, challenging, thought provoking text from Phil the Pilgrim; the bite of cold air for the first time in weeks of mild weather; the secret joy of having a hot chocolate at 9:30am and refusing to feel guilty even though such behaviour would be frowned upon by parentals for whom chocolate is definitely a post 11 o' clock privilege; the sweet smell of freshly baked mince pies, sticky sugar icing and rainbow hundreds and thousands scattered across my kitchen. Today's wonderful mess of baking is not quite as dramatic as the chocolate explosion caused by my neighbour's two lovely girls on Wednesday when they came round for Baking Club (not so much of a club really as there are only 3 members - Hamish isn't allowed to join - and admittance can only be gained by one of the girl's utterly whimsical decisions about who does and who does not have the calibre required for brownie manufacturing) but still a pleasant site of disarray. 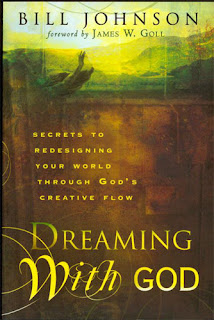 I have been frustrated this week by reading Bill Johnson's Dreaming with God. Not because the book itself is frustrating; it isn't, and I very much recommend it. But because I am frustrated with myself for my lack of passion. The way that Johnson speaks about God is of a close friend and a co-worker. I have spent much of this week feeling jealous and decidedly un-zealous about Jesus, longing for a greater sense of desiring and loving him but feeling all the worse for the failure of those feelings to be aroused. How can I not be in awe of the cross? How is it possible that it raises no wonder and thankfulness and gratefulness in my heart? What is wrong with me? Yes, I sound like a petulant teenager in that last question and I have been behaving like one for the better part of this week: moaning that I lack passion, I don't know what I'm doing, I don't have a dream to live out with God, I feel dry and dare I say it...bored. I want to say bored with God, but in a moment of greater honest, I feel bored with myself. And my moaning.

This feeling of frustration (probably tinted with a dose of self-condemnation for good measure) has made me recall two things: 1) When I first started University and encountered the Christian Union, I was told - rather too emphatically for my fragile, emotionally-undulating 19 year old self to hear - that a relationship with God is not about feelings. 2) In Eat This Book by Peterson, author of The Message, he speaks of the man-invented replacement Trinity: my holy wants, my holy needs and my holy feelings. Both recollections were unwanted. I know too well that I am self-indulgent with my feelings and that I allow my emotional grasp of the world, and my self, in any given moment to determine what is true. I do - as Peterson warns against - "install[ing] the self as the authoritative text for living" rather than allowing God's truths as revealed in his word to show me what is reality and what I have made up. This is, I now realise, although I refused to at the time, what a wiser Christian than me was trying to say when he criticized my overly emotional interpretation of God: God is not dependent on my feelings; God is God. Truth is not there to only be assented to only when it is convenient and feels warm and fuzzy (that midway point in the euphoria of worship for example) but when it doesn't feel like God is doing anything in particular, when it doesn't feel like He's close or cares or is in control.

It is true that God is close, He does care and He is in control even if I cannot admit it. 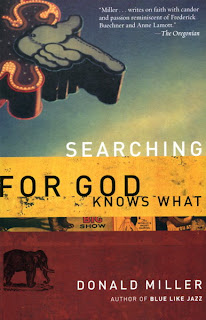 However, although I have become much more cautious of following my untrustworthy heart and head and defining God by the whims of my feelings, I remain skeptical: a relationship with God must be about feelings to a certain extent, surely? The God of the bible does not yearn for a robotic intellectual compact with mankind; he craves covenant, friends, lovers, worshippers, sheep, sons, daughters, heirs. He is wooing us back into a relationship with him, a marriage, not a platonic contractual agreement.  Don Miller writes about it far more brilliantly than I can in his book Searching for God Knows What. I would quote from it but I have lent out my copy. In it Miller wonderfully restores the sense of the Bible, at its heart, being a love story. A relationship with mystery and complications and wonder. Not 6 little boxes with pictures that you can put ticks alongside if you agree with them.

Acknowledging the love story truth that Miller speaks of has re-ignited my passion. I think this is because I find it very difficult to get excited about biblical truths taken out of the context of reality. My lack of passion has been caused by trying to force myself to get excited about the cross - never, at any point have I doubted the truth of it, only my response to it - without interacting with the world and seeing the huge, gaping cross shaped holes that lurk in the lives of people who do not know Jesus. There is not really much point in sitting in my living room getting rather annoyed because I can't summon up instantaneous joy when perhaps what is needed is to go outside of my front door and encounter God's reality somewhere else. This is not to say that I don't believe in meditation or bible reading (I can hear how my own snobbish, critical thoughts would pull this last paragraph to pieces if someone else had written). It is not to say that we should expect radiant, awe-inspiring communion with our Creator each time we open his Word and then beat ourselves up when it doesn't happen. (And yet even as I write that last sentence part of me wants to shout WHY NOT?! Why not expect it? Why not long for it?) But it is to say that in my experience of the last week sitting in a room and rebuking myself for my failure to be zealous wasn't really getting me anywhere - it certainly wasn't getting me any closer to a place where I might be zealous for God.

What did get me somewhere was spending time with a friend last night. This friend is a recovering alcoholic. She has a heart for the downtrodden like no one else I have ever met. She thanks Jesus more instantaneously, and more meaningfully, than any one else I know.  She befriends addicts and the homeless and lets them stay with her. Her flat is peaceful and welcoming and she is able to listen to my anxieties and sympathise with them even when her own life is such a mess, and I have absolutely no right to complain to her about anything. She is estranged from her daughter and grandson through drinking. She has depression. She had a difficult upbringing in a strict Catholic family, and is cut off from several members of her family. She has a somewhat confused faith but a strong one. She is quite remarkable. As we sat and talked last night for the first time this week the cross made me excited. In the broken reality of this woman's life, the cross - in its mystery and glory and beauty - made sense as it has not done whilst I sat in my living room. To be able to say again and again and again in response to shame and regret that it is finished. It is done. It is over. God has forgiven. That is a privilege and it is the truth. Truth made perfect sense within that conversation not because of my emotions but because the truth needs a context in which to be realised.

I awoke this morning with the question of what my friend needs to know. What is the truth? What is the message? What is the gospel in its barest, simpliest, purest form? I did not give my friend a list of statements to which she must agree in order to be a follower of Jesus; she did not need that because somehow she already knows everything she needs to follow Him. And what is that? I am not sure, but the three words that came to mind this morning were these: mess, love, purpose. My friend knows she is a mess and, more importantly, that she is a mess because her relationship with God has been broken for a long long time and she has ignored Him. She needs to know that God loves her. Oh, how much more sense does the return of the prodigal son make in the life of someone returning to a loving father! And, she needs to know that God has a purpose for her life. She is not simply saved from hell for heaven. She is saved right now for now, for bringing heaven to this earth before God finally completes the renewal. Johnson speaks of the need for Christians to be those who invade earth: invading earth with heaven. It is the most beautiful thing in the world that God saves us and invites us to join with him in having a deeper meaning in existing now than we ever thought possible.

I have fallen in love with the way Gungor express this in there song Beautiful Things.

In Colossians 3:16 (I love it when God plans that what you will read in the bible will somehow link up everything else that you're thinking!) it says this: "Let the message (word) of Christ dwell in you richly as you teach and admonish one another with all wisdom through psalms, hymns and songs of the spirit, singing to God with gratitude in your hearts." What is the message?! In the Bible Speaks Today commentary of Colossians, Lucas focuses on the message being the word of God in the bible. This is obviously true. But part of me found his explanation kind of flat. I realise that in commentaries it isn't possible to pull apart every verse in the desired detail and mean no disrespect to Lucas's theology or exegesis, it's just that I can't help but think is that it? No. It can't be. The word is not just scriptural truth; the word is Christ himself. There is something deadening about thinking of the word dwelling in us as just having a few handy bible verses memorised to call to mind, but something beautiful about thinking that what we're calling to mind is Christ himself. In the community of Colossae, I like to think that the Christians are constantly reminding their friends that Jesus is amongst them; they are living life together and sharing it and allowing the story of Jesus to be part of it. Not sitting cut off in isolation reading their bibles.

This post has pretty much exceeded my thought capacity. I am not even convinced the last bit made sense. I want to say that I am excited. I am excited about the cross now because I have seen where it fits into the life of some one else. I hope the Colossians spent their time hanging out together and speaking Jesus into life as it happened, filling up hurt and holes and brokenness with glorious relational, cross centered truth, not just intellectual statements which they have decided to agree on. I wonder if we could learn to do the same.
Posted by Nic Findlay at 14:28