Who is your life

I have been reading and pondering Colossians. At the start of chapter 3, Paul writes this:

"Since, then, you have been raised with Christ, set your hearts on things above. Set your minds on things above, not on earthly things. For you died, and your life is now hidden with Christ in God. When Christ, who is your life, appears, then you also will appear with him in glory." (Col 3:1-4) 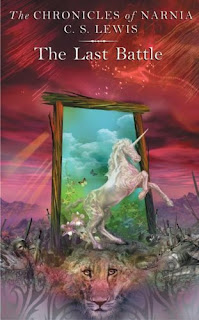 A common theme in the Colossian letter seems to be the reminder that the church have been given a new life. By believing in the death and resurrection of Jesus, we are given an entirely new existence, entrance into the really real reality. To Paul, Christ is reality, and therefore whatever we have without him is nothing in comparison. I am struck by what C.S. Lewis says, I think in The Great Divorce, about God being, in fact, more solid than humans. We think of spirits and the spiritual realm as being some how ethereal and airy fairy, but Lewis claims that it is the other way round: we are the ghosts, the shadows, the wisps of smoke, and God, and his heavenly host, are solid and real. We are a shadow of the world to come, a landscape painting in comparison to the final place. In The Last Battle, the final great book in the Narnia series, the children enter heaven to find that it is Narnia, but a new Narnia, not bigger exactly but fuller, more complete; the first Narnia was a dim copy in comparison to the blazing glory of technicolour reality:

"If you ask me," said Edmund, "it's like somewhere in the Narnian world. Look at those mountains ahead - and the big ice-mountains beyond them. Surely they're rather like the mountains we used to see from Narnia, the ones Westward beyond the waterfall?"
"Yes, so they are," said Peter. "Only these are bigger."
... "Those hills," said Lucy, "the nice woody ones and the blue ones behind - aren't they very like the southern border of Narnia?"
"Like!" cried Edmund after a moment's silence. "Why, they're exactly like. Look, there's Mount Pire with his forked head, and there's the pass onto Archenland and everything!"
"An yet they're not like," said Lucy. "They're different. They have more colours on them and they look farther away than I remembered and they're more...more...oh, I don't know..."
"More like the real thing," said the Lord Digory softly.


For Paul, this seems to be something of the reality of becoming a Christian: we have entered into a new stage of living, which is truly living ("I have come that they should have life and life to the full." John 10:10). We are not yet in heaven and yet we have been born again. Somehow, miraculously, we have died with Christ upon the cross and risen with him into a new fuller existence because in Christ, who we are now also in(!), is all fullness. He is the word of God in all its fullness (1:25), the one in whom are hidden all of treasures of wisdom and knowledge (2:3), the one in whom the fullness of the deity lives in bodily form (2:9), everything else was but a shadow of the things that were to come but the reality is found in Him! (2:17) Once we accept Christ, our lives are uprooted and replanted in him and we too, although I know in my own life I scarcely feel it or dare to believe it, have been brought to absolute fullness. (2:9)

Paul's ambition in writing to the church at Colossae is to tell them what they have already received in Christ - life! - and to encourage them to keep living in the reality of this new life which has been won for them. He continually reminds them that they are no longer the people they once were; they have become something entirely different and must now live up to the new identity bought for them by the blood of Christ. Become what you are. Paul's message is a plea to accept what Christ has already achieved for them, what Jesus has done, and an admonishment to actively strive, and keep striving, for the new identity which is theirs.

In the first two chapters of the letter, Paul reminds the church of what has been done for them: "he has rescued us from the dominion of darkness and brought us into the kingdom of the Son he loves" (1:13), "he has reconciled you by Christ's physical body through death to present you holy in his sight," (1:22), "your whole self ruled by the flesh was put off [for you] when you were circumcised by Christ" (2:11), "when you were dead in your sins and in the uncircumcision of your flesh, God made you alive in Christ" (2:13), but now the Colossians, and us, are called to start living up to who we are. We are a new creation; we had better start acting like one. Paul has reminded the church of what Christ has done and it is out of fully understanding his unbelievable grace in securing our new life that we are called to change our hearts and our minds. Hence the "since" at the start of chapter 3: in light of what I have just spent two chapters reminding you - Christ gave you life! - you now are called to live it like those who live in him and for him.

This calls for a radical change of focus. As I read these verses this morning I prayed about what it meant for me to physically, mentally, forcibly set my heart - my emotions, longings, dreams, desires - and my mind - my intelligence, thoughts, consciousness - on Jesus and his heavenly kingdom instead of this earthly one. What would a kingdom minded heart/mindset look like? I do not know. But it would, I think, spring from understanding verse 4: "when Christ, who is your life." Who. Is. Your. Life. That is an astounding sentence, or clause, or declaration, or whatever it is. Our very existence is Jesus. It doesn't merely belong to him or vaguely revolve around him; he is synonymous with what is means for me to be alive. "I am the resurrection and the life" (John 11: 25) My existence, my identity, my decisions, my direction becomes Jesus. Living is not simply for him; it is him. This kind of blows my mind. 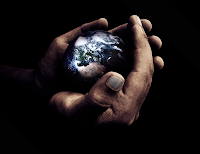 In a mind-blown state I went for a run this morning and tried to wrestle with the magnitude of Jesus being entirely responsible for my existence, and, it went further: Jesus is not just responsible for my existence; he is responsible for life. He is the eternal word through whom everything was made; he made all things and he sustains all things: "The Son is the image of the invisible God, the firstborn over all creation. For in him all things were created: things on heaven and on earth, visible and invisible; whether thrones or powers or rulers or authorities; all things have been created through him and for him. He is before all things and in him all thing hold together." (Col 1:15-17) The image that floated strangely into my head was of Jesus holding the world in his hand and then suddenly squeezing his fist shut so that they world world collapsed in one split second. I imagined the path that I was running on, the trees, the flaking white wooden fence, the sky suddenly just not existing, being utterly consumed into a black nothingness. Not that I think the end of the world will be like this - I believe it will be much more like the end of The Last Battle - but it occurred to me that, believer or not, every second of existence is owed to the mercy of Jesus. If he wanted the world to suddenly stop, it would stop. "Because of his great love we are not consumed." (Lamentations 3:22)

I seem to have come along way from Colossians, and I still don't think I have come any further in the direction of understanding what a heart or mind set on Christ would look like. But it would be joyful, it would be grateful, it would be rejoicing like a party person who knows that Jesus has given them life. I live on an estate where community is fractured; the mindset, and the heartset, is entirely earthly. It is self-centered and destructive but today I dreamed of what it would be like with renewed minds, with hearts of flesh not stone. I long to believe that that is possible: that the place where I live might be radically and beautifully redeemed, that priorities would shift and that lives would be lived in the fullness of a new reality paid for by Jesus' death. But it must start with me. I must live in this reality first. I must set my heart and my mind on what is above; I must live a life that is in Christ and about him and for him and is him; I must become what I have already been made to be, "putting on the new self, which is being renewed in knowledge in the image of its Creator." (Col 3:10)