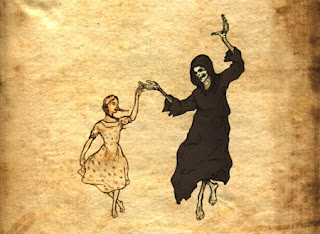 “I wanted to tell the book thief many things, about beauty and brutality. But what could I tell her about those things that she didn't already know? I wanted to explain that I am constantly overestimating and underestimating the human race-that rarely do I ever simply estimate it. I wanted to ask her how the same thing could be so ugly and so glorious, and its words and stories so damning and brilliant...I am haunted by humans." (Death, The Book Thief, Markus Zusak)

These are the concluding lines of Zusak's beautifully profound novel. It is a novel that made me weep and laugh (as recently did A Monster Calls by Patrick Ness, which is another novel of beautiful profundity) and yet I had all but forgotten about it until someone recently asked me to explain why I was still a Christian. It is an interesting question; namely, because most people ask why did you become a Christian rather than why you have remained one. And yet, it is altogether a more important question: it is not a question asked about a moment's decision, but a question asked about a decision made and remade day by day. For me, that decision has been made and remade for a decade.

In part, my answer is linked to my blogpost 'What's your prison?' (10 April, 2012). I am a Christian because I don't know how to not be; I am a Christian because I am a Prisoner of Hope (Zechariah 12:9); I am a Christian for the same reason as Simon Peter (John 6:68-9), because Jesus has the words of eternal life and I haven't found them anywhere else. However, when I was asked that question a couple of weeks ago, the first thing that came into my head was that I am a Christian because the world is broken and, more importantly, I am broken, and I think there must be something wrong with it/me. In the Book Thief, Death says that he is "always finding humans at their best and worst. [He] see[s] their ugly and their beauty, and [he] wonder[s] how the same thing can be both." This is, I think, what I was getting at: I look at the mess of the world, at its brokenness and war and famine and poverty and greed and consumerism and anorexia and love of money and hatred and racism and and and and yet I see its beauty and its goodness and the incredible capacity of human beings to endure, of what I think Virginia Woolf (or at least Mrs Jenkins, who taught me Virginia Woolf) called the peculiar resilience of the human spirit. Humans beings are both: we are terrible and glorious; we are beautiful and ugly. This is what convicts me of the existence of God.
That statement demands a little unpacking, if only because global suffering is often used as an argument against God's existence, rather than evidence for it. In The Problem of Pain, C.S. Lewis summarises the suffering argument as follows: "If God were good, He would wish to make His creatures perfectly happy, and if God were almighty He would be able to do what He wished. But the creatures are not happy. Therefore God either lacks goodness, or power, or both." I do not disagree that the creatures are unhappy. It is hard to look at the world and see happiness. Yes, it does exist. Yes, we do experience joy, but we are keenly aware of its fleeting nature, of the persistence of suffering in our own lives - the death of a loved one, a lost job, illness - and in the lives of the rest of humanity. Not only so, but also in the life of our planet. Nature, too, seems to be broken in some way: climate change, earthquakes, tsunamis, drought, another failed harvest. These are the things that Jesus, before he died, said that we should expect: "You will hear of wars and rumors of wars, but see to it that you are not alarmed. Such things must happen, but the end is still to come. Nation will rise against nation, and kingdom against kingdom. There will be famines and earthquakes in various places. All these are the beginning of birth pains." (Matthew 24:6-8) He said we should expect them; He did not say that they would not hurt and grieve us.

The world, to me, is out of kilter. There is something wrong with it. Somewhere deep down in my gut is an ache which says It wasn't meant to be like this. I have just - fruitlessly - searched the internet to find how Don Miller puts this in Blue Like Jazz. The unfindable Miller phrase stuck (or possibly paraphrased) in my head is We were meant to be good. This is, I think, what Death hints at in The Bookthief: it is the terrible paradox of humanity's never quite sustainable goodness that haunts him. It is the fact that human beings are capable of extreme and beautiful acts of love, and ugly acts of hate. At the same time.

It feels terribly taboo to say that human beings are inherently bad, that we are born evil, that human nature has something wrong with it. In arguments with friends about God this fast becomes the bone of contention, Hamlet's infamous rub: it is not ok to suggest that we are born sinful. It's downright offensive. Perhaps though, the offensiveness of it depends on your definition of sinful. I'm not going to quote some mystery Hebrew/Greek to suggest that we've translated the word wrong (I have no ideas about anything Greek or Hebrew to be honest!), but I guess my understanding of human nature, as described in the bible, is that it is not what it was intended to be. The evilness of human nature is not a badness, as such, but a brokenness. When man rejected God as his King - whether or not you believe in a literal Adam and Eve and an apple - something broke inside humanity. All man that followed has remained broken because he, she, they are no longer in relationship with their Creator. Lewis' creatures are unhappy not because God has failed in His goodness or His power, but because the creatures have failed to allow God to make them happy. They have chosen to seek life elsewhere, and it cannot be found. Not in all its fullness (John 10:10) anyway, or in its eternity (John 17:3).

This all sounds very highfalutin and philosophical and it doesn't bear much resemblance to the - much shorter - answer that I gave my friend to the question of why I'm still a Christian. When I examine my own heart and thoughts and motives and actions, I am disappointed and ashamed. This is not self-deprecation. Nor do I want anyone to think that I am beating myself up because of unrealistically high expectations about my own capabilities and behaviour (although that is, certainly, on occasion, the truth!). I am horrified by the things I think sometimes, by the things I do and fail to do, by walking into a room and checking whether people are thinner or fatter than me before deciding who to talk to. Even writing that last sentence makes me feel a little sick, but I do it. I endlessly compare myself to others and avoid opportunities to love and know other people because my identity might be threatened. I secretly rejoice when other people do badly. I am jealous of other people's successes. I am a sick individual. Again that sounds strong and I am not seeking for people to tell me that I'm not, that it's ok, that all people behave like that. Because that is precisely my point. We all do it. We all behave like that, but why? Why do we need to be told we're ok? Why do we fail to live up to our own standards? Why do we curse ourselves for stupid decisions and mistakes because we know we could have done something better? "I know that good itself does not dwell in me, that is, in my sinful nature. For I have the desire to do what is good, but I cannot carry it out. For I do not do the good I want to do, but the evil I do not want to do—this I keep on doing." (Romans 7:18-19)

Because we are broken. Because we've forgotten how to listen to the One who can tell us we're ok inspite of all that's wrong with us. The One who says You are my beloved and on you my favour rests, with you I am well pleased. The One who speaks the same words over us as he speaks over his one and only Son. (Matthew 3:17, Mark 1:11, Luke 3:22)

I ache to be perfect. I ache to be better than I am, to truly throw off the sinful nature that entangles and pulls down and holds back and trips me up (Hebrews 12:1) and be like Him. (12 Corinthians 3:18) I am longing for the day when he comes so that I'm not broken anymore and the world isn't broken either. "We know that the whole creation has been groaning as in the pains of childbirth right up to the present time. Not only so, but we ourselves, who have the firstfruits of the Spirit,groan inwardly as we wait eagerly for our adoption to sonship, the redemption of our bodies." (Romans 8:22-23). I am waiting for adoption for the not yet that follows this now. And yet I am thankful for this now, for in this now there is the hope of the not yet; in this now there is the certainty of what is to come:

"For we know that if the earthly tent we live in is destroyed, we have a building from God, an eternal house in heaven, not built by human hands. Meanwhile we groan, longing to be clothed instead with our heavenly dwelling, because when we are clothed, we will not be found naked. For while we are in this tent, we groan and are burdened, because we do not wish to be unclothed but to be clothed instead with our heavenly dwelling, so that what is mortal may be swallowed up by life. Now the one who has fashioned us for this very purpose is God, who has given us the Spirit as a deposit, guaranteeing what is to come." (2 Corinthians 5:1-5)